Marijuana refers to the dried leaves, flowers, stems, and seeds from the Cannabis sativa or Cannabis indica plant and in other terms referred to as weed. It contains the mind-altering chemical THC and other similar compounds. It is the most commonly used illicit drug and it’s widespread among young people. 11 million young adults’ ages 18 to 25 years used marijuana in 2015. Marijuana is smoked in 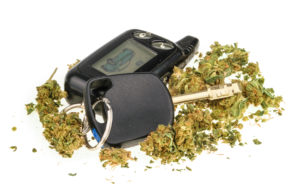 hand-rolled cigarettes called joints or in pipes called bongs. Some people are using vaporizers. These products extract active ingredients (including THC) from the marijuana and collect their vapor in a storage unit then he/she inhales the vapor, not the smoke. Other vaporizers use a liquid marijuana extract.

Use of illicit drugs or misuse of prescription drugs can make driving a car unsafe and it puts the driver, passengers, and others who share the road at risk just like drunk driving. The effects of marijuana can slow reaction time, impair the judgment of time and distance, and decrease coordination, these impairments lead to road accidents. Studies have made known the negative effects of marijuana on drivers, including an increase in lane weaving, poor reaction time, and altered attention to the road. Use of alcohol with marijuana has made drivers more impaired, causing even more lane weaving and as a result, some of the states have zero-tolerance laws for drugged driving. This means an individual can face charges for driving under the influence (DUI) if there is any amount of drug in the blood or urine.

According to the 2016 National Survey on Drug Use and Health (NSDUH), in 2016, 20.7 million people aged 16 or older drove under the influence of alcohol in the past year and 11.8 million drove under the influence of illicit drugs. The survey findings also show that men are most likely than women to drive under the influence of drugs or alcohol. Accidents are the fifth leading cause of death in the US; nearly half are motor vehicle accidents, which according to the Fatality Analysis Reporting System (FARS) killed 38,588 people. Motor vehicle accidents are the nation’s leading cause of death in those under 30 years of age. The contribution of drugs of abuse to this accident rate has attracted increasing attention in recent years because of the dramatic increase in drug use. In 2002, the NSDUH estimated that 22 million Americans have substance use or dependence problem. As marijuana is the most commonly used drug of abuse and also smoked most commonly in the age group that also has the most road traffic accidents. It is of great concern to both governments and clinicians responsible for counseling patients with substance abuse problems because of the contribution of marijuana smoking to road traffic accidents. It is important to understand the extent to which marijuana use contributes to such accidents because it leads to a high cost of crashes both human and financial.

Driving with BAC of .08% or more gets you convicted of a “per se” DUI. Some states also have per se DUI laws that apply to marijuana meaning that these states have laws that forbid driving with a certain concentration of THC in your system. The DUI laws in every state make it illegal to drive while in point of fact impaired by marijuana.

Per se marijuana DUIs– in order to prove the DUI charge, a prosecutor would typically need to produce blood test results showing the driver was over the legal limit. The conviction is based just on the amount of THC in the driver’s system.

Impairment DUIs-The prosecution must show a “substantial” or “significant” effect from the substance ingested. Evidence of impairment usually comes from the arresting officer’s observations of things like:

In general, the penalties for a marijuana-related DUI are the same as those for an alcohol-related DUI conviction. The consequences of a first offense might include:

State laws always vary and lots of factors can have an impact on the sentencing. For example, an offender who’s never been in trouble before will likely be treated more leniently than an offender with a long criminal record. Enhanced penalties normally apply for DUIs that involves injuries or deaths.

Affected individuals are encouraged to be interested in drug education which is a planned provision of information, resources, and skills relevant to living in a world where psychoactive substances are widely available and commonly used for a variety of both medical and non-medical purposes, some of which may lead to road accidents example use of marijuana. Laboratory tests and driving studies show that cannabis may highly impair several driving-related skills in a dose-related manner, but the effects between individuals vary more than they do with alcohol tolerance, differences in smoking technique, and different absorptions of THC. Driving and trainer studies show that harmful effects vary in a dose-related manner, and are more pronounced with highly automatic driving functions, but more complex tasks that require mindful mechanism are less affected, which is the opposite pattern from that seen with alcohol.

Because of both this and an increased awareness that they are impaired, marijuana smokers tend to compensate effectively for their impairment by utilizing a variety of behavioral strategies such as driving more sluggishly, passing less, and leaving spaces between themselves and cars in front of them. Combination of marijuana with alcohol reduces the ability to use such strategies effectively. Case studies are varying, but suggest that while low absorptions of THC do not increase the rate of accidents, and may even decrease them, serum absorptions of THC higher than 5 ng/mL are linked with an increased risk of accidents. Marijuana is a drug and it is also classified, whereby a drug class is a term used to define medications that are clustered together because of their comparison. There are four central methods of classifying these groups: